Dubai Arena opened ahead of schedule last summer, the emirate’s latest mega project in the run-up to this year’s World Expo in Dubai.

The multipurpose indoor arena, officially named the Coca-Cola Arena after a ten-year deal with the fizzy drinks giant, can house an audience of 17,000 on four levels spanning half-a-million square feet.

It will host sports events, concerts, comedy, live theatre, conferences, galas and weddings in the heart of a luxury shopping and dining destination.

It is located in City Walk – a leisure, retail and residential destination in the shadow of the Burj Khalifa, the world’s tallest building – which itself is new and was developed by Meraas, a company owned by Dubai ruler Sheikh Mohammed bin Rashid Al Maktoum.

It’s just one of many projects the emirate is completing in the lead-up to this year’s World Expo in Dubai, which runs from October 2020 to April 2021, and will attract a predicted 25 million visitors.

A study by Ernst & Young commissioned by the organisers forecast that Expo 2020 will contribute around $6 billion to the United Arab Emirates’ economy during the six-month duration of the fair.

But with the fear of random acts of terror rife in architects’ minds, they have given intimate consideration to the perimeter security around the arena.

In particular, the threat of vehicle-borne attacks in cities across the globe has led to an increased use of Hostile Vehicle Mitigation (HVM) measures such as PAS68 and IWA14 bollards, barriers and other blocking equipment.

Indeed, the whole City Walk zone has been planned as a pedestrianised oasis with no parking offered for the Dubai Arena’s regular paying punters, who are being directed to alternative modes of transport than the car.

ESF turned to British manufacturer Eagle Automation, with over 30 years’ experience, as their supply partner for the PAS68 products.

The PAS68 standard ensured products underwent vehicular impact testing and have proven ability as a vehicle security barrier against an assessed threat.  The products are installed in accordance with accompanying PAS69 guidance, supervised by ESF’s team of trained operatives. 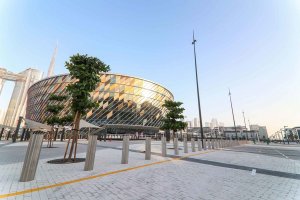 The bollards form a highly visible security deterrent all in the same shroud so they all look identical, although different ratings and specifications were used dependent on specific threats and needs.

ESF managing director Alan Lowry said: “A greater focus is being placed on perimeter security across the globe due to the increase of attacks, especially where large crowds gather.

“We have been very fortunate to deliver a number of projects across the UAE in recent years with our street, themed and solar-powered products, including IMG Worlds of Adventure, Warner Brothers Park and Global Village.  We are hopeful to continue that growth throughout the UAE and Middle East in the years ahead.”